Warming At The Enemy’s Fire 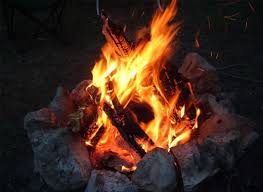 Simon Peter was following Jesus, and so was another disciple. Now that disciple was known to the high priest, and entered with Jesus into the court of the high priest…
Now Simon Peter was standing and warming himself. So they said to him, “You are not also one of His disciples, are you?” He denied it, and said, “I am not.” One of the slaves of the high priest, being a relative of the one whose ear Peter cut off, *said, “Did I not see you in the garden with Him?” Peter then denied it again, and immediately a rooster crowed. John 18:15, 25-27

Peter really got worked over by the enemy of his soul on the night Jesus was betrayed. Jesus warned him that Satan wanted to sift him like wheat and that Peter would deny him. Impulsively Peter draws the sword at Jesus capture, only to be corrected by Jesus. Then he follows Jesus from a distance, unsure of the danger and perhaps his mixed feelings of allegiance. Lastly, he warms himself at the enemy’s fire. In the end, he denies the very one whom he loves. Tragic.

It could happen to me. So how do I follow close and maintain allegiance? I must reject the philosophy of worldliness and cling to Jesus words and ways.

God, what a reminder today that I want to be following You closely. Fill my mind with godly perspective, Jesus ways, and scripture today. I want to warm myself at your camp fire.