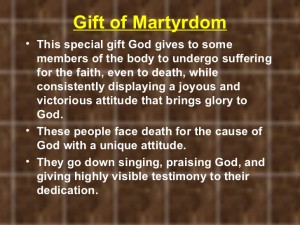 And Stephen, full of grace and power, was performing great wonders and signs among the people. But some men from what was called the Synagogue of the Freedmen, including both Cyrenians and Alexandrians, and some from Cilicia and Asia, rose up and argued with Stephen. But they were unable to cope with the wisdom and the Spirit with which he was speaking. Acts 6:8-10

A girl named Elizabeth in my youth ministry disclosed to me… “pastor Doug, I believe I have the gift of martyrdom. I believe I will give my life on the mission filed one day”. Wow! I told her “let’s not tell your parents right now… at least until you finish Bible college”. Stephen was first given the shared responsibility to organize the feeding of Hellenistic widows. God also gave him the ability to powerfully share God’s Word. But, this was met with opposition to such a degree that ultimately the Jewish leaders had him killed. He is the second martyr of the church. How terrible, yet how wonderful to be considered worthy to suffer like Jesus did. This spiritual gift (martyrdom) can only be used once. It is perhaps then, the highest spiritual gift. Sadly, many are martyred today around the world.

Am I prepared to die for my faith in Jesus Christ? Is God calling me to speak for Him in any new ways or venues?

God, I praise You for Your Holy Word. I see the need for such revival in this country. What is my role? Let me know when and how to speak for You. If it costs me everything, so be it.