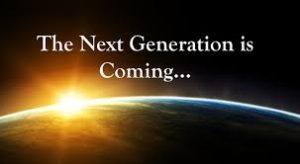 And it came about when Samuel was old that he appointed his sons judges over Israel.
Now the name of his firstborn was Joel, and the name of his second, Abijah; they were judging in Beersheba.
His sons, however, did not walk in his ways, but turned aside after dishonest gain and took bribes and perverted justice. 1 Samuel 8:1-3

The blessings and benefits enjoyed by the people of God were about to end. Under Samuel’s leadership the ongoing threat of the Philistines was mitigated. Peace was established with the Amorites. Baal and Ashtaroth idol worship ended. Murmurs began. And the people of God demanded a king so they could be like other nations. If only his sons had continued in godly ways, perhaps the desire for a king would not have arisen. I worry about the next generation and whether godly leaders will arise and proclaim the gospel of Jesus Christ, adhere to Biblical teaching and remain obedient to God. Christianity is always one generation away from extinction. That’s a sobering thought.

God, how am I preparing those within the next generation for leadership? Am I modeling what matters most?

Lord Jesus, what a wonderful new week that has begun. I am grateful on so many levels. Help me do my part as I pray, work and lead at the school to prepare the next generation of Christian leaders. Oh God, help our countries leaders, their rhetoric and actions appear to be devoid of godly counsel and wisdom from above. We are suffering from self-made religion and the consequences of worshipping the false gods of Baal and Ashtaroth instead of You, the living and true God; the God of Abraham, Isaac and Jacob.