Take Up Thy Bed 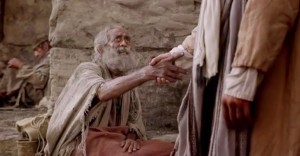 Rulers and elders of the people, if we are on trial today for a benefit done to a sick man, as to how this man has been made well, let it be known to all of you and to all the people of Israel, that by the name of Jesus Christ the Nazarene, whom you crucified, whom God raised from the dead— by this name this man stands here before you in good health.
He is the stone which was rejected by you, the builders, but which became the chief corner stone.
And there is salvation in no one else; for there is no other name under heaven that has been given among men by which we must be saved.” Acts 4:8-12

There is a story about two priests walking in the Vatican. One looks upon the ornate structure, the inlaid gold on the altar, etc. and says ‘see, we no longer have to say “silver and gold, have I none”, speaking of the wealth within the church. To which the other priest replies… “yes, but neither have we the power to say “take up thy bed and walk”! Peter and John spoke with boldness before the religious leaders. They were convinced men with whom God was moving in a powerful and miraculous manner. Those men described as “o you of little faith”, were now exercising that little faith and mountains were beginning to move, namely 5,000 people had believed in Jesus. In addition, Jesus was fulfilling the promise to them that at the moment they needed the words to say, He would give them the words. Similar to the day of Pentecost, Peter was able to cite a relevant scripture and prophecy to explain and exhort those around him.

How bold am I in sharing the message of Jesus? How am I exercising my faith?

God, as this day begins, there are so many opportunities to glorify You and lift up the name of Jesus. There is also great need and people who are wounded, broken-hearted, sick, hurting, lost, confused and in need of a miracle. With the silver and gold I have or have not, I want to be bold enough to say to people ‘what I do have, I give you… in the name of Jesus, get up and walk’! Do miracles again today.