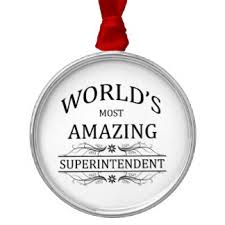 And we know that in all things God works for the good of those who love him, who have been called according to his purpose.
For those God foreknew he also predestined to be conformed to the image of his Son, that he might be the firstborn among many brothers and sisters. And those he predestined, he also called; those he called, he also justified; those he justified, he also glorified. Romans 8:28-30

God intends and superintends. I know a little about that since I am a superintendent. He intended the world to be a perfect place of harmony between He and all creation. The enemy of our soul and sin has frustrated nearly every aspect of that intention. But, in Christ, God superintended the redemption of the world. We, as people, are the height of His creation and re-creation. In His foreknowledge God mapped out in advance how each who would believe would ultimately be like Jesus Christ in word, thought and deed. He goes before us in all things. We follow by His calling, justification by faith, and ultimately He reveals in us, who He Himself is in character and action! This is the Christian life.

Do I love Him? Am I called according to His purpose?

God, I really can trust that You will bring about good, even in this fallen world. Would You help me manage my world by affording Your wisdom, Your power and Your favor today. May others see You as the superintendent of the world.