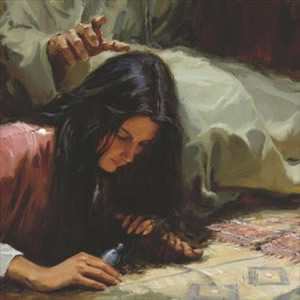 Jesus answered him, “Simon, I have something to tell you.” “Tell me, teacher,” he said.

“Two people owed money to a certain moneylender. One owed him five hundred denarii, and the other fifty. Neither of them had the money to pay him back, so he forgave the debts of both. Now which of them will love him more?”

Simon replied, “I suppose the one who had the bigger debt forgiven.” “You have judged correctly,” Jesus said.

Then he turned toward the woman and said to Simon, “Do you see this woman? I came into your house. You did not give me any water for my feet, but she wet my feet with her tears and wiped them with her hair. You did not give me a kiss, but this woman, from the time I entered, has not stopped kissing my feet. You did not put oil on my head, but she has poured perfume on my feet. Therefore, I tell you, her many sins have been forgiven—as her great love has shown. But whoever has been forgiven little loves little.”

Too often we minimize the sin debt owed to God that has been satisfied by Jesus’ sacrificial death upon the cross. We live by comparisons to others failing to realize that had I been the only one who ever lived and sinned, it would be my hands nailing Him to the cross. The woman understood her sin, but more than that, she understood the person of Jesus Christ who would pay the penalty for it. We ought to focus upon the one who died to determine the value of the debt paid, not so much comparing our list of sins to anyone else.

Do I love much or little? Why?

God, I know I have been forgiven much. I want to love much, not little. Thank you for the reminder. May I be one who anoints Jesus feet, offers oil for his head, and allows tears of repentance to fall upon Him.