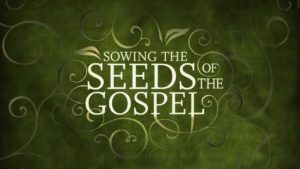 When they had been brought safely through, then we found out that the island was called Malta. The natives showed us extraordinary kindness; for because of the rain that had set in and because of the cold, they kindled a fire and received us all. But when Paul had gathered a bundle of sticks and laid them on the fire, a viper came out because of the heat and fastened itself on his hand.
When the natives saw the creature hanging from his hand, they began saying to one another, “Undoubtedly this man is a murderer, and though he has been saved from the sea, justice has not allowed him to live.” However he shook the creature off into the fire and suffered no harm. But they were expecting that he was about to swell up or suddenly fall down dead. But after they had waited a long time and had seen nothing unusual happen to him, they changed their minds and began to say that he was a god. Acts 28:1-5

I like to grow things. I think I am one of those people who have a “green thumb”. The shipwreck landed Paul in Malta by God’s providence. The encounter was very positive, although they mistakenly believed Paul to be a murderer. People jump to conclusions about Christians all the time. It happens today. But, by the time he left, a fond affection was built between Paul and the natives of Malta. Today, a strong movement of God continues (https://en.wikipedia.org/wiki/Christianity_in_Malta) Some have doubted the veracity of the shipwreck story. Interestingly, the presence of the Malta church is ample evidence. Bob Cornuke sought out to find the anchors that were cut away from the ship. And guess what? He found them: http://www.khouse.org/articles/2004/503/

How often do I discount what God may be doing through first encounters with people? Am I patient enough so that the seeds of the gospel stay with people I Meet?

God, as this day continues, I pray You will direct my heart, mind and steps! Thank you for my wife, kids, and friends. Help me continue to study and prepare for my exams in school… to be diligent and without distraction. Please help my mom recover and return home from the hospital. And help me be a seed planter.