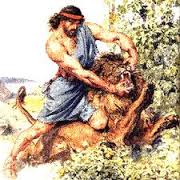 So the men of the city said to him on the seventh day before the sun went down,
“What is sweeter than honey? And what is stronger than a lion?”
And he said to them,
“If you had not plowed with my heifer, You would not have found out my riddle.”

Then the Spirit of the Lord came upon him mightily, and he went down to Ashkelon and killed thirty of them and took their spoil and gave the changes of clothes to those who told the riddle. And his anger burned, and he went up to his father’s house. But Samson’s wife was given to his companion who had been his friend. Judges 14:18-20

The Philistines discovered Samson’s riddle because of his wife. In their discovery, their people harm not good because Samson reacted by fulfilling the bargain by killing 30 of their countrymen in order to provide the clothes he promised. Its amazing how everything Samson does has intrigue and deceit surrounding it. Its an unhealthy way to live. It would have been better to simply war on the Philistines in the same way Gideon dealt with the Amalekites and Midianites.

How about me, do I mess around and play games of intrigue with my spiritual enemies? Do I get close to the edge of sin?

God, I want to be separate and apart from anything that displeases You. Forgive me for playing even close to the line. Today, I look forward to thinking and living holy for You.