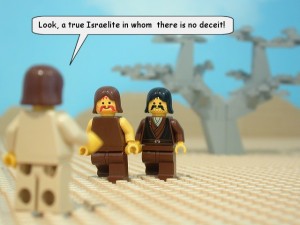 Philip *found Nathanael and *said to him, “We have found Him of whom Moses in the Law and also the Prophets wrote—Jesus of Nazareth, the son of Joseph.” Nathanael said to him, “Can any good thing come out of Nazareth?” Philip *said to him, “Come and see.” Jesus saw Nathanael coming to Him, and *said of him, “Behold, an Israelite indeed, in whom there is no deceit!” John 1:45-47

John the Baptist directed some of his disciples toward Jesus at the beginning of His ministry. In doing so, he fulfilled his own calling ‘he must increase, I must decrease’. One of the early followers named Philip brought his brother Nathanael. He was a man who simply, without reservation or pretense, told it like it is. Jesus seemed to like that quality.

Can Jesus say of me, ‘behold one in whom there is no deceit’?

God, as this day begins, may the words of my mouth and the intentions of my heart be pure and without deceit! You are so good. I am grateful that you hear my prayers and move with power. Let’s tip another domino today. (You know what I mean).