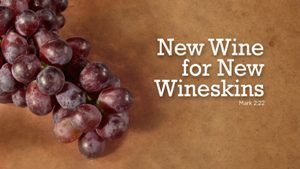 Jesus was fulfilling God’s redemptive plan is such a complete way that it could be described as a whole new “Way”. As a matter of fact, His early followers and movement was call “The Way”. God’s desire to become personal and real to individuals and to relate together a body of believers was being lived out before their very eyes by the Son of God. The new wine (God, His Word, His will, and His ways) could not be contained by people who wanted to return to the fasting, rituals, temple and sacrifice based worship. That “old wineskin” is unable to hold what God was fulfilling through His Spirit. Of course, God’s Word, love, sharing the kingdom of God with others… were still major priorities.

How have I responded to God’s redemptive plan? Am I embracing the new wine skin?

God, I pray that I might be one who builds up Your kingdom on earth today. May I recognize the opportunity to reach out and love someone in Your name.