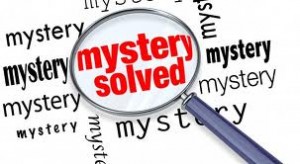 Beyond all question, the mystery from which true godliness springs is great:
He appeared in the flesh, was vindicated by the Spirit,
was seen by angels, was preached among the nations,
was believed on in the world, was taken up in glory. 1 Timothy 3:16

After describing the qualifications of elders and deacons who serve as overseers in the church, Paul describes where the qualifying character qualities come from. Its a mystery. Not the kind you can’t figure out, like a ‘who dunnit’. But, rather the one that unfolds and becomes known over time. Ready for it? How do we become godly? The answer is Jesus! His imputed righteousness becomes in fact our practiced righteousness! It all begins with Him. “He appeared in the flesh”. We have a Savior who lived a perfect and sinless life in the flesh. He is our example and goal and source all at the same time. “He was vindicated by the Spirit”. We too are vindicated or “proved out” as the Spirit of God living in us, changes us into the glorious version of us.

Has the mystery of godliness begun in me? Can the transforming power and work the Holy Spirit become evident in me? Can other see it or is it still a mystery?

God, thank you that Jesus lived this life in such a way that the mystery is no longer so mysterious. He is my example. As simple as it sounds, I feel like today I am asking in all my situations… What would He do, say, or think. Would you miraculously meet my needs according to the riches found in Him, Christ Jesus? May my little faith intersect with Your great power. And Lord, wow! I praise You for working mightily in Joary’s life and family.