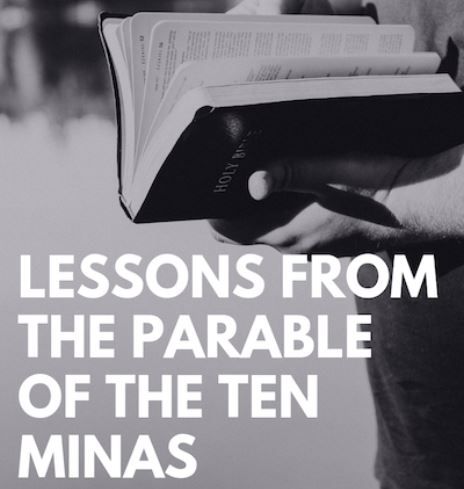 Ever have one of those overly involved micro managing bosses? The one’s that check on you every 10 minutes, measure everything and squash all creative ideas? Jesus is quite the opposite! He told a parable that indicates He gives lots of latitude to fulfill His mission. He provides the resources (minas), and will come to take account to see our devotion, love and faithfulness when He returns.

If Jesus is the king of my life, I will use what He has given me (a mina, 5 or 10), acknowledge it is from Him, steward the gift in such a way that it produces something for His kingdom and later present it back to Him on the day He returns. This is how my love and respect are evident to Him. We all will give an account of our lives. Either we are a faithful servant, a slothful, unfaithful and fearful servant, or an outright hater of Jesus. I know which I want to be.

Now while they were listening to these things, Jesus went on to tell a parable, because He was near Jerusalem and they thought that the kingdom of God was going to appear immediately.  So He said, “A nobleman went to a distant country to receive a kingdom for himself, and then to return.  And he called ten of his own slaves and gave them ten minas, and said to them, ‘Do business with this money until I come back.’  But his citizens hated him and sent a delegation after him, saying, ‘We do not want this man to reign over us.’ When he returned after receiving the kingdom, he ordered that these slaves, to whom he had given the money, be summoned to him so that he would learn how much they had made by the business they had done. Luke 19:11-15 NASB

How will I use the time, talent, and treasure God has entrusted to me today?

God, as this day begins- new opportunities to invest the minas You’ve provided for Your glory. Lead and guide me by Your Spirit. Help me make wise decisions and love people one at a time in Your name.