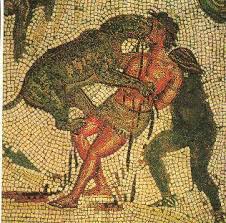 When he opened the fifth seal, I saw under the altar the souls of those who had been slain because of the word of God and the testimony they had maintained. They called out in a loud voice, “How long, Sovereign Lord, holy and true, until you judge the inhabitants of the earth and avenge our blood?” Then each of them was given a white robe, and they were told to wait a little longer, until the full number of their fellow servants, their brothers and sisters, were killed just as they had been. Revelation 6:9-11

Not everyone receives the message of Jesus. Some are quite hostile to it. Persecution of Christians has occurred throughout history. In John’s heavenly vision, he sees their souls awaiting the consummation of the ages and the completion of the number of those who would be slain.

How do I feel about those who suffer and die for the sake of Christ? Are they my heroes? Am I prepared to live and give my life for Jesus’ sake?

God, I want to have the longing cry of those martyred, “How long, Sovereign Lord… until… you avenge our blood”. God protect us from our enemies and Your’s. But if I must suffer for Your sake, I am willing.