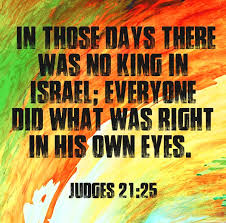 The sons of Benjamin did so, and took wives according to their number from those who danced, whom they carried away. And they went and returned to their inheritance and rebuilt the cities and lived in them.
The sons of Israel departed from there at that time, every man to his tribe and family, and each one of them went out from there to his inheritance.
In those days there was no king in Israel; everyone did what was right in his own eyes.

The number of men in the cities occupied by the tribe of Benjamin had be decimated by war. A fear arose that this tribe of Israel might not continue to exist. In keeping with their oath not to let their sons marry, a solution arose. Let the young Benjamite men who survived, choose women from the North side of Bethel. It wasn’t a perfect solution, it was a compromise. The problems in Israel were overwhelming. The reason is clearly stated… there was no king in Israel. God desired to be their king, but instead… everyone did what was right in their own eyes. It was a disastrous time! I fear we are living in similar times.

Do I try to cover up bigger issues of obedience with piece meal solutions? What have I learned from history about making sure God is the king of my heart?

Lord, I fear for America. We are losing our allegiance to You and even mocking You. And the more we suffer economically, socially and otherwise… it seems we are less inclined to come to You for help. We need so desperately a revival brought about by Your Holy Spirit. Would you use me and the other pastors in this area to model Christlikeness and to speak up for what is right in Your eyes.