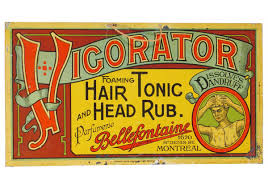 She made him sleep on her knees, and called for a man and had him shave off the seven locks of his hair. Then she began to afflict him, and his strength left him. She said, “The Philistines are upon you, Samson!” And he awoke from his sleep and said, “I will go out as at other times and shake myself free.” But he did not know that the Lord had departed from him. Then the Philistines seized him and gouged out his eyes; and they brought him down to Gaza and bound him with bronze chains, and he was a grinder in the prison. However, the hair of his head began to grow again after it was shaved off. Judges 16:19-22

Delilah had worn Samson out and discovered what he thought was the secret to his strength – his hair. The reality was that his strength was the presence of the Lord in his life. The Lord had departed. As a result, Samson was blinded and humiliated. But, his hair began to grown again. God’s redeeming grace is evident in his life and ours. He allows our hair to grow back. He forgives and restores.

How conscious am I of God’s redeeming grace? Very!

Oh Lord, thank you that you forgive and forgive. May I be as a Nazirite, dedicated to you and set apart to accomplish great things in Your kingdom, recognizing its only by Your might and power and presence.