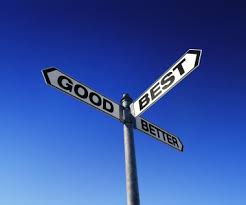 A vision appeared to Paul in the night: a man of Macedonia was standing and appealing to him, and saying, “Come over to Macedonia and help us.” When he had seen the vision, immediately we sought to go into Macedonia, concluding that God had called us to preach the gospel to them. Acts 16:9-10

Paul responded to the amazing call of God to help the people in Macedonia and the results were nothing short of stellar and miraculous. In the process of obeying God’s call, Paul had to say no to very good, but lesser priorities. The Bible says Paul was instructed by God to bypass other opportunities for the gospel. “They passed through the Phrygian and Galatian region, having been forbidden by the Holy Spirit to speak the word in Asia; and after they came to Mysia, they were trying to go into Bithynia, and the Spirit of Jesus did not permit them; and passing by Mysia, they came down to Troas.” When Paul arrived in Philippi, he met Lydia who was traveling there from her hometown of Thyatira. She heard Paul praying by the river and was converted and became a major supporter of his missionary journeys. Paul was thrown into the jail in Philippi and would be miraculously delivered. The jailer was converted and a church was started.

Am I hearing the voice of God and choosing the best He has planned? I think so. I feel as if I am listening and hearing what God wants and continually asking for wisdom and guidance. I see fruit around me and miracles happening.

Lord Jesus, you called the apostle Paul. You called me. May I see in visions and hear you say “go left, go right” and may I respond. You move the heart of the king like a watercourse. Move mine.