Forgiveness In The Kingdom 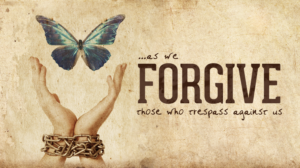 Then Peter came and said to Him, “Lord, how often shall my brother sin against me and I forgive him? Up to seven times?”
Jesus *said to him, “I do not say to you, up to seven times, but up to seventy times seven.

“For this reason the kingdom of heaven may be compared to a king who wished to settle accounts with his slaves. When he had begun to settle them, one who owed him ten thousand talents was brought to him. But since he did not have the means to repay, his lord commanded him to be sold, along with his wife and children and all that he had, and repayment to be made. So the slave fell to the ground and prostrated himself before him, saying, ‘Have patience with me and I will repay you everything.’ And the lord of that slave felt compassion and released him and forgave him the debt.
But that slave went out and found one of his fellow slaves who owed him a hundred denarii; and he seized him and began to choke him, saying, ‘Pay back what you owe.’ So his fellow slave fell to the ground and began to plead with him, saying, ‘Have patience with me and I will repay you.’ But he was unwilling and went and threw him in prison until he should pay back what was owed.
So when his fellow slaves saw what had happened, they were deeply grieved and came and reported to their lord all that had happened. Then summoning him, his lord *said to him, ‘You wicked slave, I forgave you all that debt because you pleaded with me. Should you not also have had mercy on your fellow slave, in the same way that I had mercy on you?’ And his lord, moved with anger, handed him over to the torturers until he should repay all that was owed him.
My heavenly Father will also do the same to you, if each of you does not forgive his brother from your heart.” Matthew 18:21-35

Things are different in the kingdom of God as opposed to things outside the kingdom of God. In the kingdom, forgiveness is a way of life. We will give and receive forgiveness all the time (seventy times seven). In scene one of Jesus’ story, a man is desperate because he owes a debt he cannot pay to a master who can exact punishment for his inability to pay the debt. You and I have a sin debt to God we cannot pay. We are desperate and must rely upon Jesus’ payment for us,… which is an expression of God’s mercy, love and forgiveness. In the same way, we who have been forgiven should have mercy on our fellow man and forgive from the heart, which is the seat of our emotions which have been touched by God so profoundly that an overflow of love is continually available to those who wrong us.

Does my head get in the way? Not saying I shouldn’t be wise, but do I talk myself out of the forgiveness God wants to flow from my life?

Lord Jesus, is there anyone I have wronged and that I need to seek for forgiveness? Am I holding back on anyone? Help me be a fountain of forgiveness and reconciliation in Your kingdom. Thank you that my sins are washed away and I’ve been redeemed. As this day begins, would You direct my day in such a way that Your kingdom is realized here on earth.

Continuing with the Resolutions of Jonathan Edwards: 5. Resolved, never to lose one moment of time; but improve it the most profitable way I possibly can.