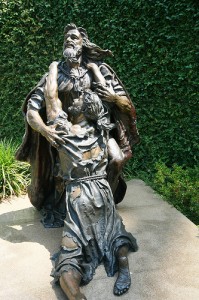 But when he came to his senses, he said, ‘How many of my father’s hired men have more than enough bread, but I am dying here with hunger! I will get up and go to my father, and will say to him, “Father, I have sinned against heaven, and in your sight; I am no longer worthy to be called your son; make me as one of your hired men.”’ So he got up and came to his father. Luke 15:18-20

The story of the prodigal son has resonated with repentant sinners throughout the centuries. Its a universal story that reveals God as a loving heavenly Father that desires for each of us to return to Him. I love how the prodigal son rehearses his lines “Father, I have sinned against heaven…” as he makes his appeal before God Himself. He is dramatic, and so he should be. He decides he is only worthy to be a slave in his father’s household… but even that is better than being on his own. The best line for me is when the father’s justifies his beautiful treatment of this son by saying “this son of mine was dead, but now is alive”!

Is this how I came to Christ? Oh Yes, I had such an understanding of God’s grace and my willingness and desire to simply be a slave in His house, than be on my own. And then, I came to understand the adoption into His family, the inheritance I have in Christ. How cheap an earthly inheritance seems (that I would have squandered anyway).

Heavenly Father, God, My Lord, My Savior, my friend, and now my Abba. Thank you for receiving me into Your family and welcoming me with open arms.