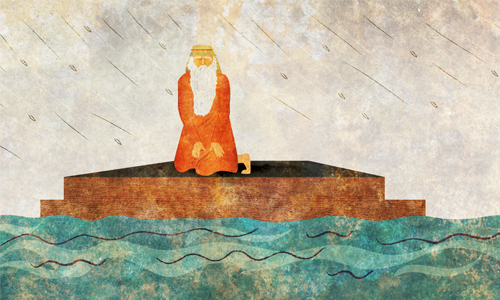 Adam had relations with his wife again; and she gave birth to a son, and named him Seth, for, she said, “God has appointed me another offspring in place of Abel, for Cain killed him.”  To Seth, to him also a son was born; and he called his name Enosh. Then men began to call upon the name of the Lord. Genesis 4:25-26 NASB

Perhaps one of the most difficult experiences in all of life is when a parent loses a child. I’ve been there with them- “its not supposed to be this way”; “you are not supposed to outlive your kids”, they rightfully say. At some point, parents contemplate the question, should we have any more kids? Adam and Eve faced the decision and Adam relations again with his wife and she gave birth to a son. While you can never ‘replace’ a lost one (we are unique and uniquely loved), they saw Enosh as a gift from God. His very name means ‘mortal or weak man’. It was apparent how fragile life really is… and they acknowledged it… perhaps as a tribute to Abel. God was keenly aware of their situation. His grace was being poured out. They received it. And men began to call upon the name of the Lord. What a beautiful picture of love and redemption.

What needs redeeming in my life? How has God poured out His grace? How often am I calling upon the name of the Lord?

God, as this day begins- I look to You for direction, inspiration, power and truth. Would you use me as a voice of reconciliation- turning men’s hearts to You. May many call upon the name of the Lord and find You as their Heavenly Father. You alone give life.