Enemy At The Gates 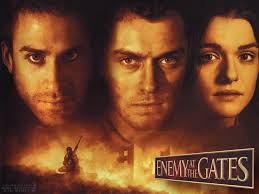 Now when the enemies of Judah and Benjamin heard that the people of the exile were building a temple to the Lord God of Israel, they approached Zerubbabel and the heads of fathers’ households, and said to them, “Let us build with you, for we, like you, seek your God; and we have been sacrificing to Him since the days of Esarhaddon king of Assyria, who brought us up here.” But Zerubbabel and Jeshua and the rest of the heads of fathers’ households of Israel said to them, “You have nothing in common with us in building a house to our God; but we ourselves will together build to the Lord God of Israel, as King Cyrus, the king of Persia has commanded us. Ezra 4:1-3

Pastor John MacArthur once said ‘Satan doesn’t always attack the church, sometimes he join it’. That was the case during the rebuilding of the temple. Their true colors would soon show. Their values and motives were not to genuinely serve God, even though they claimed great allegiance to the Lord.

How do we live and love within the life of the church without ascribing bad motives to other people? How can we really be innocent as doves and wise as serpents?

Lord Jesus, You are the answer. I want my heart to be free from making judgments about other people, especially those who claim allegiance to You. As this day begins with a prayer time with the men, may You be lifted up!