Effective, Even In Chains 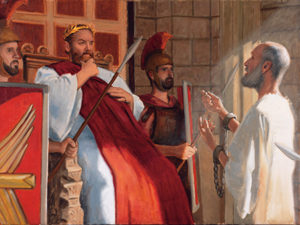 But I found that he had committed nothing worthy of death; and since he himself appealed to the Emperor, I decided to send him. Yet I have nothing definite about him to write to my lord. Therefore I have brought him before you all and especially before you, King Agrippa, so that after the investigation has taken place, I may have something to write. For it seems absurd to me in sending a prisoner, not to indicate also the charges against him.” Acts 25:25-27

Sometimes, as Christians, we will be the object of scorn and persecution without reason. Festus had listened to the accusations of the Jews about Paul and found nothing worthy of punishment. Festus couldn’t even articulate or write down what crime he supposedly committed. Placing Paul before King Agrippa, he hoped to understand more so he could at least send a meaningful letter with Paul to Caesar.

Can I endure wrongful persecution? Am I so sensitive that I must always defend myself?

God, thank you for Paul’s example of endurance and creativity. He seems to have found a way to honor You and preach the gospel, even in chains. Wow! May I do better with my freedom.