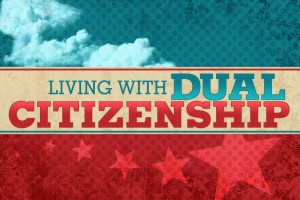 Paul came also to Derbe and to Lystra. And a disciple was there, named Timothy, the son of a Jewish woman who was a believer, but his father was a Greek, and he was well spoken of by the brethren who were in Lystra and Iconium. Paul wanted this man to go with him; and he took him and circumcised him because of the Jews who were in those parts, for they all knew that his father was a Greek. Acts 16:1-3

There was something special about Timothy. Paul felt it when they first met and he was selected to accompany him on his missionary journey. His ‘dual citizenship’ would be an asset in dealing with the mistreatment of the Roman government in Philippi. Once the authorities realized they had beaten he and Paul before giving them a trial, they were embarrassed and afraid of reprisal. All of us as Christians have become dual citizens, as our new and foremost allegiance is to our heavenly citizenship. We are as it were, now, pilgrims and sojourners in the very land that we were born into.

Do I use my rights as a US citizen to their fullest for the sake of the gospel? Am I clear that my first citizenship is heaven?

God, thank you that I live in such a free and wonderful country. Help America remain godly. Cause a great stirring and revival in us. I want my dual citizenship to be without conflict.