A Strange Beast Is Coming 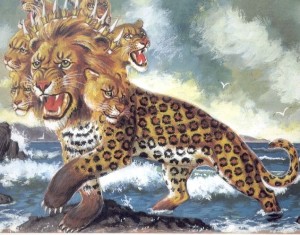 And the whole earth was amazed and followed after the beast; they worshiped the dragon because he gave his authority to the beast; and they worshiped the beast, saying, “Who is like the beast, and who is able to wage war with him?”
There was given to him a mouth speaking arrogant words and blasphemies, and authority to act for forty-two months was given to him. And he opened his mouth in blasphemies against God, to blaspheme His name and His tabernacle, that is, those who dwell in heaven. Revelation 13:4-6

A very strange beast appears in John’s vision. The beast arises out of the sea and is multi-faceted. But, his identity and purpose are singular… to deceive the world into worshiping Satan. This is a combination of worldwide forces under control of the enemy of God that will wield great power at the end of the age. His time will be short (42 months), thank goodness.

Am I so close to God that I cannot be amazed and deceived by evil?

God, as this day unfolds, may it be a blessed one. Please be close to my friends who are suffering loss. Thank you for near perfect weather for the wedding ceremony today. Thank you that while evil may show its power, You are greater and will have the final word.