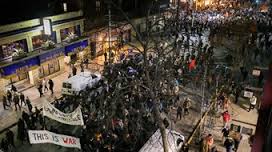 After quieting the crowd, the town clerk *said, “Men of Ephesus, what man is there after all who does not know that the city of the Ephesians is guardian of the temple of the great Artemis and of the image which fell down from heaven?
So, since these are undeniable facts, you ought to keep calm and to do nothing rash.
For you have brought these men here who are neither robbers of temples nor blasphemers of our goddess. So then, if Demetrius and the craftsmen who are with him have a complaint against any man, the courts are in session and proconsuls are available; let them bring charges against one another. But if you want anything beyond this, it shall be settled in the lawful assembly. Acts 19:35-38

Sometimes we forget that unsung heroes are found in the form of city council members or people running a department in a municipality. This unnamed clerk in Ephesus possibly saved the lives of Paul, Gaius and Aristarchus. How? He appealed to the crowd’s superstition about the giant statue of Diana falling from heaven and he calmed their economic fears while calling them all to a lawful and peaceful resolution. Oh if we could hear more voices like that in Berkeley, Ferguson and other places of unrest. Too often Christians are getting caught up with such heated passion at possible injustices that they take their case to the street in riotous manner and disregard for the law. This is not good, nor pleasing to the Lord Jesus. Its time to stop it and denounce it. Whether its the smashing of windows, defiance of authority, or chanting death threats, we need to lead by example by first turning to times of prayer and then letting our voices be heard in a tone that is understandable in ways that do not offend. It would be good practice now, for when real persecution comes.

When I perceive an injustice or wrongdoing or mistreatment, what is my initial reaction? Do I seek to understand first, before trying to make my points, protect my economic interest or join the crazy crowd?

God, as a person who desires to be a positive and godly influence, please continue to impart to me the mind of Christ in controversial matters. May I always lead with love in the midst of disagreements. I desire Your favor in my life and ministry. I am looking forward to what You have planned today. Thank you for giving my mom and appetite, help her gain weight.