You Can’t Put God In A Box 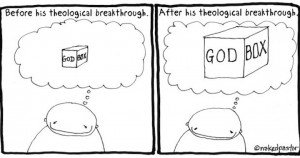 What shall we say then? That Gentiles, who did not pursue righteousness, attained righteousness, even the righteousness which is by faith; but Israel, pursuing a law of righteousness, did not arrive at that law.
Why?
Because they did not pursue it by faith, but as though it were by works. They stumbled over the stumbling stone, just as it is written,
“Behold, I lay in Zion a stone of stumbling and a rock of offense,
And he who believes in Him will not be disappointed.” Romans 9:30-33

God is merciful. He is sovereign (which means… He does what He wants in accordance with His character). And in an ‘out of the box’ move, God unfolds His plan to save a remnant of Israel and Gentiles as well, through the salvific work of Christ on the cross. Amazing! In Paul’s explanation, he reminds us that in doing all of this God is consistent in His character: He keeps His word (promises), He is just (righteous and fair), He is merciful and Sovereign. How does God do it? He calls and predestines and chooses. We demonstrate faith. Faith, then, is the great equalizer. This is of course a great stumbling block even today, to those wanting to justify themselves by works. For me, I will stay on the grace and mercy plan.

What within my life would indicate that my faith is a true and saving faith?

God, thank you ahead of time for this day. I look forward to working on the home project with Maureen. I am so grateful for her and the gift she is in my life. I feel prompted to pray for the spiritual leaders in my life. Please draw each one close, speak words of encouragement to each, and clarify the visions they need to lead effectively. Give them Your burden, not a man made burden. Bless, Chuck, Pete, Galen, Phyllis, Penny, Joleen, Taleah, Timbo, Kas, David, David, Dan, and Diana.