Would I Go To Jail For God’s Creative Order 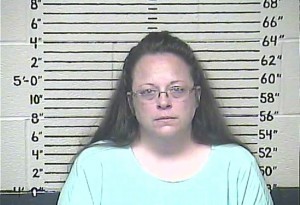 The Lord God fashioned into a woman the rib which He had taken from the man, and brought her to the man. The man said,
This is now bone of my bones, and flesh of my flesh;
She shall be called Woman, because she was taken out of Man.
For this reason a man shall leave his father and his mother, and be joined to his wife; and they shall become one flesh.
And the man and his wife were both naked and were not ashamed. Genesis 2:22-23

This Bible passage describes the culmination of God’s creation and also defines His creative order… a man and woman joined together as husband and wife. It is fascinating that there is an all out assault in today’s culture, bent on destroying everything God creates or to redefine it away from His intent. People really are lost in this world. Recently, Kim Davis was jailed because, as county clerk, she refused to issue marriage licenses to same sex couples. She of course is right in following her conscience. She will most likely spend several months in jail until her term as clerk is fulfilled. She stands in good company with her civil disobedience – Dr. Martin Luther King Jr., the apostle Paul, John the Baptist, etc. The county would be wrong to issue any licenses in her name, during this time. I don’t like to think too much about political issues during my devotional time, but this act inspires me.

For what matter of conscience am I willing to take a stand? Even if it means jail time?

God, thank you for my wife and the life You’ve designed. I want to pray that Kim Davis will be encouraged and visited by friends and family in this season. Be very real and close to her today.