Who Is This King Of Glory? 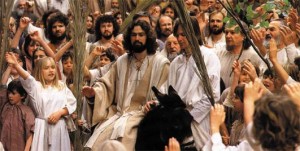 The crowds going ahead of Him, and those who followed, were shouting,
“Hosanna to the Son of David;
Blessed is He who comes in the name of the Lord;
Hosanna in the highest!”
When He had entered Jerusalem, all the city was stirred, saying, “Who is this?” And the crowds were saying, “This is the prophet Jesus, from Nazareth in Galilee.” Matthew 21:9-11

Jesus’ triumphal entry into the city of Jerusalem was accompanied by beautiful humility. Its a strange contrast to picture the king of the universe on a little donkey instead of a giant horse, palm branches and peasants instead of dignitaries presenting gifts. I love this! This is what made me fall in love with my Savior. Of course, one day He will return in absolute power and authority. The Bible says ‘every knee shall bow, every tongue confess that Jesus Christ is Lord’. I plan to be one returning by His side. Its rather fascinating that many still did not know who He was. The same is true today.

Does my life honor Him as my King and Savior? Am I introducing Him to those who don’t know Him yet?

Jesus, You are my king. Oh I want to live in a way that honors You today. Thank you for saving me. I declare with those humble peasants “Hosanna, to the Son of David. Blessed is He who comes in the name of the Lord”. Looking forward to today!