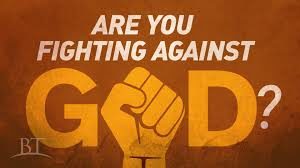 But when they heard this, they were cut to the quick and intended to kill them.
But a Pharisee named Gamaliel, a teacher of the Law, respected by all the people, stood up in the Council and gave orders to put the men outside for a short time.
And he said to them, “Men of Israel, take care what you propose to do with these men.
For some time ago Theudas rose up, claiming to be somebody, and a group of about four hundred men joined up with him.
But he was killed, and all who followed him were dispersed and came to nothing.
After this man, Judas of Galilee rose up in the days of the census and drew away some people after him; he too perished, and all those who followed him were scattered.
So in the present case, I say to you, stay away from these men and let them alone, for if this plan or action is of men, it will be overthrown; but if it is of God, you will not be able to overthrow them; or else you may even be found fighting against God. Acts 5:33-39

The apostles were opposed by the religious leaders. But among them, Gamaliel spoke with wisdom and deterred his fellow leaders from egregious error. He warned them that they could find themselves actually fighting against God in their zeal to preserve their own religious ways. And it was true, even Saul (who became Paul), got sucked into the persecution of Christians. He should have followed the Gamaliel principle. If its the actions of men, it will be overthrown, but if its is of God, nothing will overthrow it. And history has shown us, the life, death, and resurrection of Jesus and the movement which has touched every continent in the world is of God.

Is there any area of my life and ministry where I need to apply the Gamaliel principle?

God, You are so gracious. I know at times I have fought with You to my own detriment. Give me wisdom to always be on Your side of every issue. Help me see how You are moving in the world today.