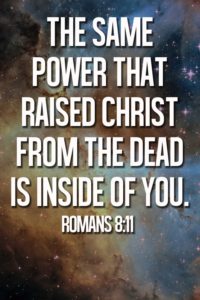 Now in Joppa there was a disciple named Tabitha (which translated in Greek is called Dorcas; this woman was abounding with deeds of kindness and charity which she continually did. And it happened at that time that she fell sick and died;
But Peter sent them all out and knelt down and prayed, and turning to the body, he said, “Tabitha, arise.” And she opened her eyes, and when she saw Peter, she sat up. And he gave her his hand and raised her up; and calling the saints and widows, he presented her alive. It became known all over Joppa, and many believed in the Lord. Acts 9:36-37;40-42

Can you imagine being used by God to bring someone back to life?
God was confirming the message of Jesus with power and miracles. In this case, Peter’s prayers were answered and Tabitha was raised from the dead. The result was that many believed. I believe God is still doing miracles today and is willing to confirm the truth of his Word with them. Of course, I must operate in faith and be led by His Spirit.

When was the last time God did a miracle in me, through me, or near me… confirming the reality of Jesus Christ? How has my faith limited Him or been obediently exercised for His glory?

God, thank you for your great love. I appreciate the people you brought into my path today. Bless Maureen on the final days of her mission trip. Help my kids seek after things that matter the most and become the people You want them to be. And Lord, help me keep growing in the knowledge and grace of Jesus Christ.