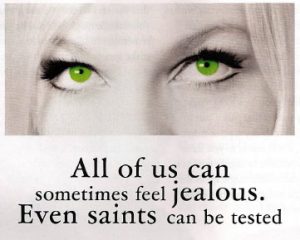 The women sang as they played, and said, “Saul has slain his thousands, and David his ten thousands.”
Then Saul became very angry, for this saying displeased him; and he said, “They have ascribed to David ten thousands, but to me they have ascribed thousands. Now what more can he have but the kingdom?”
Saul looked at David with suspicion from that day on.
Now it came about on the next day that an evil spirit from God came mightily upon Saul, and he raved in the midst of the house, while David was playing the harp with his hand, as usual; and a spear was in Saul’s hand.
Saul hurled the spear for he thought, “I will pin David to the wall.”
But David escaped from his presence twice. 1 Samuel 18:7-11

Envy and jealousy are called the green-eyed monster. God’s people are tested in this area of sin, like everyone else. King Saul was overwhelmed by it and even experienced what appears to be a demonic influence in this area of his psyche. On this occasion he tried to kill David with a spear… and we will always have the saying “pinned to the wall” because of his out-of-control behavior.

How about me? Do I envy others? Am I jealous of their success or do I genuinely celebrate it?

God, I know the answer to my jealousy is contentment and that is only found in You. Thank you for the wonderful life You have given me. Help me be grateful and without comparisons. May I genuinely celebrate the good things in other people’s lives. You are good and filled with grace, that is sufficient.