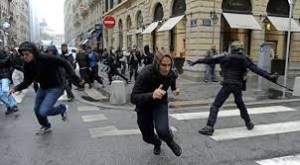 A silversmith named Demetrius, who made silver shrines of Artemis, brought in a lot of business for the craftsmen there. He called them together, along with the workers in related trades, and said: You know, my friends, that we receive a good income from this business. And you see and hear how this fellow Paul has convinced and led astray large numbers of people here in Ephesus and in practically the whole province of Asia. He says that gods made by human hands are no gods at all.
There is danger not only that our trade will lose its good name, but also that the temple of the great goddess Artemis will be discredited; and the goddess herself, who is worshiped throughout the province of Asia and the world, will be robbed of her divine majesty. Acts 19:24-27

The preaching of the gospel can upset the economic livelihood of people. It can lead to misguided people taking to the streets to riot. It did in Ephesus and it has in many other places in the world. Demetrius was deceived into idolatry and found a good living coming from the production of idols. His fear about what would happen to his “idol making union”, reveals how fragile his faith and the object of his worship really was… “she will be robbed of her divine majesty”. How often people misplace value on objects, status or even other people who cannot compare to God’s divine majesty.

How about me? Is there anything in my life that has my affections to that degree? Am I working with God to help people who have been led astray to come to Him, the only wise, true and living God?

This is my calling Lord. It is a high one indeed. Oh that You would would prepare me anew for this day’s journey.