Parting Is Such Sweet Sorrow 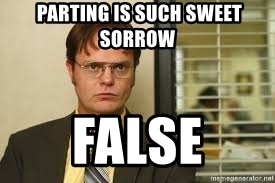 Then Jacob arose and put his children and his wives upon camels; and he drove away all his livestock and all his property which he had gathered, his acquired livestock which he had gathered in Paddan-aram, to go to the land of Canaan to his father Isaac.  When Laban had gone to shear his flock, then Rachel stole the household idols that were her father’s.  And Jacob deceived Laban the Aramean by not telling him that he was fleeing.  So he fled with all that he had; and he arose and crossed the Euphrates River, and set his face toward the hill country of Gilead. Genesis 31:17-21 NASB

Not everyone will be made happy by our decisions in life… especially the ones that affect grandchildren. There is a time to gather and a time to part ways. Sometimes its a change in a work situation or a move to a new home… that brings the parting of ways. Jacob knew it was time for he and Rachel (along with the rest of the family) to move back from Paddan-Aram to Canaan. Laban, Rachel’s father did not like it at all. He was offended partly by the move and partly because Jacob didn’t tell him it was happening. Both men were deceivers. I have little sympathy for Jacob, except that he didn’t get to say goodbye to his grandkids. I get that. We must follow God’s call on our life. Its best when we can part ways with a blessing. Jacob eventually received that from Laban.

What moves are ahead for me? Are there partings that I can make sweeter?

God, as this day begins- I thank You for Your sovereign plans, calling on my life and family. I bless you that in this season I am enjoying the children and grandkids. May I always be close to them.