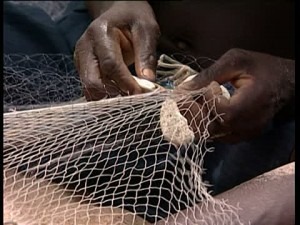 When He had finished speaking, He said to Simon, “Put out into the deep water and let down your nets for a catch. Simon answered and said, “Master, we worked hard all night and caught nothing, but I will do as You say and let down the nets.”
When they had done this, they enclosed a great quantity of fish, and their nets began to break; so they signaled to their partners in the other boat for them to come and help them.
And they came and filled both of the boats, so that they began to sink. But when Simon Peter saw that, he fell down at Jesus’ feet, saying, “Go away from me Lord, for I am a sinful man!”
For amazement had seized him and all his companions because of the catch of fish which they had taken; and so also were James and John, sons of Zebedee, who were partners with Simon.
And Jesus said to Simon, “Do not fear, from now on you will be catching men.” When they had brought their boats to land, they left everything and followed Him. Luke 5:4-11

Fishermen are notorious liars. Construction workers are foul-mouthed. Lawyers are… well, I don’t need to offend everyone. We are all ‘sinful men’ until we are regenerated and changed by the Holy Spirit of God. We recognize our sinfulness when we come into contact with the Holy Son of God. That’s what happened to Simon (known as Peter). The encounter was so dramatic that he changed occupations that day, left everything and followed Him. In a sense, he received some ‘new nets’ to catch men, not fish. His obedience is the radical response to His call. Sometimes Jesus says ‘stay in your station of life’, other times He says ‘leave it all behind, I have a different calling on your life’.

Do I understand the calling on my life? Am I following it, or allowing too much influence from others or even the pressure that comes from the question ‘how will I make a living’?

God, I trust You. Thank you for the great calling on my life. This morning I am praying for my friend Dottie and her first chemo treatment. Please remove fear from her and give her a peace that comes by Your presence. Make my schedule such that I can visit mid-morning.