I Will Never Eat Meat Again 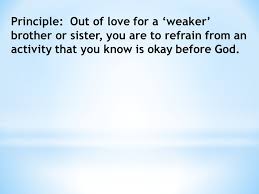 However not all men have this knowledge; but some, being accustomed to the idol until now, eat food as if it were sacrificed to an idol; and their conscience being weak is defiled. But food will not commend us to God; we are neither the worse if we do not eat, nor the better if we do eat. But take care that this liberty of yours does not somehow become a stumbling block to the weak.
Therefore, if food causes my brother to stumble, I will never eat meat again, so that I will not cause my brother to stumble. 1 Corinthians 8:7-9, 13

Paul illustrates what we call “the weaker brother principle”. The big idea is that while I have many Christian liberties, the more mature I become, I will gladly give them up for the sake of younger or weaker Christians. In this case, Paul felt no conviction about eating food in either an idol temple or food that was previously ‘dedicated’ to an idol. Why not? His knowledge that there is but one living and true God, gave him confidence that he was not in actuality doing anything wrong. However, because other younger Christians were coming out of a lifestyle of worshiping these so-called idols, Paul did not want them to be confused, having agreed in their conscience to leave that practice, it appeared that somehow Paul was advocating for it. Tricky stuff. The right attitude is expressed in saying “if food causes my brother to stumble, I will never eat meat again”. Let’s be like that with each other and we will inspire a great deal of spiritual growth.

Is there anything I am so attached to… or feel is my Christian right and liberty, that I wouldn’t let it go for the sake of others? Why not?

God, help me walk circumspectly today, aware of the positive and negative influence I have on others. I need Your declaration of holiness today, so I might walk in confidence before You, available to love others in Your name. My life may appear boring to some, but for the sake of others, I will forego liberties. After all, I made a commitment to be a bond-servant of Christ.