I Believe, Reckon Me To Be Righteous 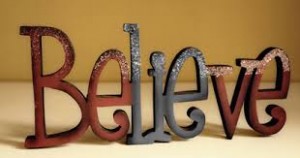 Then behold, the word of the Lord came to him, saying, “This man will not be your heir; but one who will come forth from your own body, he shall be your heir.”
And He took him outside and said, “Now look toward the heavens, and count the stars, if you are able to count them.” And He said to him, “So shall your descendants be.”
Then he believed in the Lord; and He reckoned it to him as righteousness. Genesis 15:4-6

Abraham had been promised many things from God. The one remaining promise was an heir. Abraham thought that perhaps God wasn’t going to fulfill it in a literal way, so he resigned himself that his heir wouldn’t be a natural born relative. And then, God spoke! Abraham believed God and God credited it to him as righteousness. In this statement, the saving power our faith and God’s grace is illustrated. Of course, the next step was to act on that belief… something that would require the cooperation of his wife Sarah.

Am I believing God for the easy thing? Or am I listening for his voice and acting on what He reveals?

God, You are able. There are three big things I am believing You for in this season. Oh, I would long to see Your power and grace and mercy on display. Tonight, I am thinking and letting You know… I believe! I hesitate to write it, but I will. I believe You have great blessings for the school. I believe You can re-kindle the faith in my daughter’s heart and one day she will marry a godly man that treats her well. I believe in You!