His Blood Is On Each Of Us 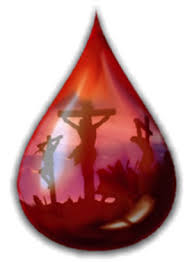 When Pilate saw that he was accomplishing nothing, but rather that a riot was starting, he took water and washed his hands in front of the crowd, saying, “I am innocent of this Man’s blood; see to that yourselves.” And all the people said, “His blood shall be on us and on our children!”
Then he released Barabbas for them; but after having Jesus scourged, he handed Him over to be crucified. Matthew 27:24-26

Jesus underwent a mockery of a trial. His so-called crime, claiming He is the Son of God and the King of the Jews. He is both. Pilate tried to wash his hands of Him, but the guilt for Jesus’ death was not assuaged one bit with the water and wringing. Likewise, the Jews carry guilt, for the Bible says ‘He came unto His own, but they knew Him not”. And you and I too are guilty of His blood. Why? Because of the sins we have committed. Thank God, that Jesus death on the cross has purchased my pardon. Indeed His blood is on us and and our children. But, that cleansing blood, when applied to a repentant sinner, brings life eternal.

How do I see Jesus’ life, death and resurrection applying to my life? Have I received forgiveness for the penalty of sin and a new power over sin itself?

God, forgive me for the times I tried to wring my hands of Jesus and the significance of His life. Thank you that He did not die in vain. May my life reflect that great truth.