Full Of Faith, Full Of Courage 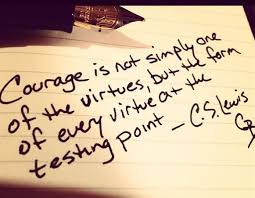 You men who are stiff-necked and uncircumcised in heart and ears are always resisting the Holy Spirit; you are doing just as your fathers did.
Which one of the prophets did your fathers not persecute? They killed those who had previously announced the coming of the Righteous One, whose betrayers and murderers you have now become; you who received the law as ordained by angels, and yet did not keep it. Acts 7:51-53

Stephen became the first martyr of the faith. In making his wonderful defense, he recounted God’s plan and Israel’s continued disobedience to Moses, David and the prophets. He finished his remarks with a scathing indictment… to which they took up stones and killed him. Many reject Jesus and His message today with equal vehemence. If they could kill the messenger, they would.

How bold am I for God sake? Do I let others shout me down or will I engage them?

Lord, I want You to be able to count on me. Prepare me in these days to speak for You. What a privilege it would be. I know the reaction of some will be like Stephen.