Faith Vs. Trying Too Hard 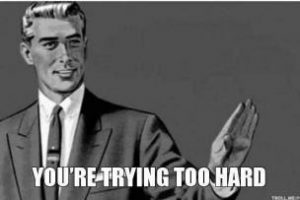 But God came to Abimelech in a dream of the night, and said to him, “Behold, you are a dead man because of the woman whom you have taken, for she is married.”
Now Abimelech had not come near her; and he said, “Lord, will You slay a nation, even though blameless?
Did he not himself say to me, ‘She is my sister’? And she herself said, ‘He is my brother.’
In the integrity of my heart and the innocence of my hands I have done this.”
Then God said to him in the dream, “Yes, I know that in the integrity of your heart you have done this, and I also kept you from sinning against Me; therefore I did not let you touch her.
Now therefore, restore the man’s wife, for he is a prophet, and he will pray for you and you will live. Genesis 20:3-7

King Abimelech was warned by God in a dream, not to take Sarah as his wife. The half-truth told by Abraham was exposed. But, it nearly destroyed a king and nation. God was gracious and rescued the situation. This was an incredibly close call that could have upset God’s redemptive plan. Instead of acting in faith and taking God as His word, Abraham tried a fleshly was out of his fearful situation. We are not too different today. In doing so, he saw a miracle that rescued the situation in spite of himself, instead of because of him. It was a very close call.

How about me? Am I trying too hard to manipulate God’s will to unfold instead of trusting Him and His promises… believing that He still does miracles?

God, I know You still do miracles. Give me wisdom to know how hard to work, talk, push, and give human effort… and then at that magic moment, to cease… and allow You to do a miracle.