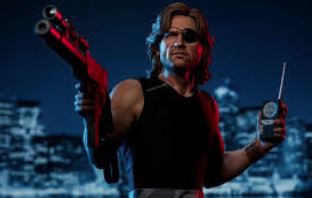 Then the two men said to Lot, “Whom else have you here? A son-in-law, and your sons, and your daughters, and whomever you have in the city, bring them out of the place; for we are about to destroy this place, because their outcry has become so great before the Lord that the Lord has sent us to destroy it.”  Lot went out and spoke to his sons-in-law, who were to marry his daughters, and said, “Up, get out of this place, for the Lord will destroy the city.” But he appeared to his sons-in-law to be jesting.

When morning dawned, the angels urged Lot, saying, “Up, take your wife and your two daughters who are here, or you will be swept away in the punishment of the city.”  But he hesitated. So the men seized his hand and the hand of his wife and the hands of his two daughters, for the compassion of the Lord was upon him; and they brought him out, and put him outside the city. Genesis 19:12-16 NASB

In the movie, Escape from New York, Snake Plisskin has to save the President from a reprobate city that has become a prison to all who live there. He is a savior figure who faces difficulty and danger. Two heavenly messengers (angels), are sent to rescue righteous Lot and family from Sodom. I am not impressed greatly by the depravity of mankind, but I am amazed and our stubbornness and unbelief. Lot was utterly unable to persuade anyone of the impending doom. America is danger of God’s judgment for our many sins (perhaps we are experiencing His wrath already- that of abandonment). Where are the heroic angels and pastors sent by God to warn of our need for repentance or at least of the way out through faith in Christ?

Has God set me as a watchman on the wall? Have I been silenced by the criticism of the crowd? Is my life a testimony of the hope for anyone who would put their faith in Jesus Christ?

God, as this day begins- its a morning of fun, and an afternoon of ministry. I want to thank you ahead of time for the opportunity to go surfing with my buddy Vince. He is a constant source of joy. Would you, O Lord, continue to be patient with us (America). Use me and other pastors like Jim Domen, Jack Hibbs, Chuck Booher, Greg Laurie, Rodney Kyles, to turn hearts back to You. You alone have the words of eternal life.