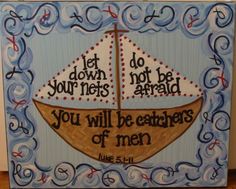 When Simon Peter saw this, he fell at Jesus’ knees and said, “Go away from me, Lord; I am a sinful man!” For he and all his companions were astonished at the catch of fish they had taken, and so were James and John, the sons of Zebedee, Simon’s partners. Then Jesus said to Simon, “Don’t be afraid; from now on you will fish for people.” So they pulled their boats up on shore, left everything and followed him. Luke 5:9-11

Peter, James and John became the closest earthly friends of Jesus. When God’s power was demonstrated through the miracle of catching fish, Peter realized he was in the presence of His holy God, and instantly became aware of his own sinfulness. This is what happens. The closer we get to God and His miracle working power, the more aware we are of our own sin and shortcomings. I love that Jesus forecast for these men what their real purpose in life would become… not catching fish, but catching men. What a calling.

How aware am I my own sin and shortcomings? How close to God and His miracle working power am I? Am I involved in catching men?

God, what a privilege to be part of Your kingdom and to be called into Your service. Remind me often today, that I am about catching men. Thank you that You have forgiven my sin and found me useful. Now may I be counted as one of Your closes earthly friends as well!