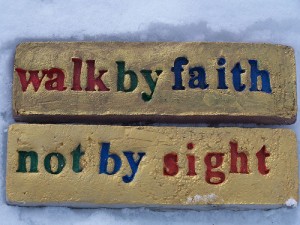 By faith we understand that the worlds were prepared by the word of God Hebrews 11:3
By faith Abraham, when he was called, obeyed 11:8
By faith even Sarah herself received ability to conceive 11:11
By faith Abraham, when he was tested, offered up Isaac 11:17
By faith Moses, when he had grown up, refused to be called the son of Pharaoh’s daughter 11:24
By faith the walls of Jericho fell down 11:30
By faith (Gideon, Barak, Samson, Jephthah, of David and Samuel and the prophets) conquered kingdoms, performed acts of righteousness, obtained promises, shut the mouths of lions, quenched the power of fire, escaped the edge of the sword, from weakness were made strong, became mighty in war, put foreign armies to flight 11:33-34

And without faith it is impossible to please Him, for he who comes to God must believe that He is and that He is a rewarder of those who seek Him. Hebrews 11:6

God places a premium on faith… the ability to believe in Him, though we can’t yet see Him. What a powerful thing faith is! We really understand God by faith and through faith. How counter-intuitive, that the invisible God would reveal Himself to those who would simply believe in Him. While there is plenty of evidence for God’s existence, He has always rewarded ‘faith’. As a matter of theology, God saves by grace through faith. Our part has always been faith.

How faith filled am I? How pleasing is my life to God?

Lord, what a day it is already. Thank you for the early start filled with joy and purpose. I believe in You wholeheartedly, though I have never seen You. One day I will. Thank you for the greatest faith building revelation – Jesus Christ come in the flesh. Oh what it must have been like to behold Him. And like He said ‘if you’ve seen Me, you’ve seen the Father!’ Lead and guide me as You desire today. By faith, I ask and expect miracles in my life!