A Reason To Rejoice 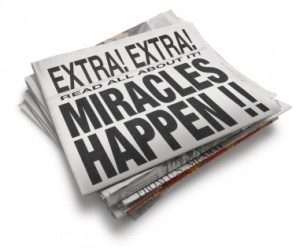 Therefore, those who had been scattered went about preaching the word. Philip went down to the city of Samaria and began proclaiming Christ to them.
The crowds with one accord were giving attention to what was said by Philip, as they heard and saw the signs which he was performing.
For in the case of many who had unclean spirits, they were coming out of them shouting with a loud voice; and many who had been paralyzed and lame were healed.
So there was much rejoicing in that city. Acts 8:4-8

Philip the evangelist went to where Jesus first revealed Himself as the Christ. The gospel message was well received. God did miracles to confirm His Word being preached. I believe God wants to do the same thing today. Whenever belief is meeting unbelief, God shows up to confirm His Holy Word. If we would only be willing to share our faith and proclaim His truth, He would do the rest.

How bold am I in sharing the gospel? Do I have faith God will confirm His Word with miracles?

God, what an amazing reality. You did it then, please do it today… confirm the preaching of Your Word with miracles, in Jesus name.