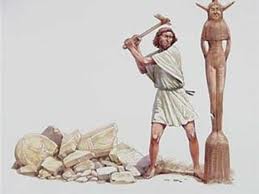 But Joash replied to the hostile crowd around him, “Are you going to plead Baal’s cause? Are you trying to save him? Whoever fights for him shall be put to death by morning! If Baal really is a god, he can defend himself when someone breaks down his altar.” So because Gideon broke down Baal’s altar, they gave him the name Jerub-Baal that day, saying, “Let Baal contend with him.” Judges 6:31-32

Gideon destroyed the altar of the false god Baal. His father defended him the next day. It was almost as if Joash was proudly saying “that’s my boy!” Finally, someone in Israel that God could use to turn the people back toward God and receive His protection and blessings once again. Our nation needs some Gideon’s too! The false gods facing us are hedonism, materialism, selfishness, and the like. We are in bondage and slavery because of them.

How about me? Are there any false gods that have my attention, affection or energy?

God, I am so grateful for You, Your Word and Your ways. Following Jesus example and teaching have brought such goodness into my life. When I see my kids following the Lord, I am often proudly saying “That’s My Boy!”… and “Girl”. God, let’s go tear down the altars of Baal today!