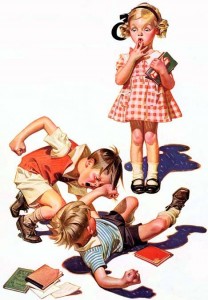 Then God remembered Rachel, and God gave heed to her and opened her womb. So she conceived and bore a son and said, “God has taken away my reproach.” She named him Joseph, saying, “May the Lord give me another son.” Genesis 30:22-24

Brothers and sisters compete with each other. Sometimes its not healthy. Rachel and Leah were sisters married to Jacob. They were competitive and jealous of one another when it came to having children, especially boys. They even got their hand maids into it. When Rachel finally had a child of her own with Jacob she called him Joseph, then exclaimed she wanted to the Lord to give her another. He would give her Benjamin later.

Am I competitive with anyone in an unhealthy way? Can I be content with the success of others, rather than my own?

God, I know that You are grieved by silly jealousies among people. Help me operate today based on love and love alone. After all, every believer is a person for whom Christ died and with whom I will spend eternity.