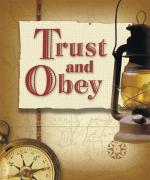 So the prophet departed and waited for the king by the way, and disguised himself with a bandage over his eyes. As the king passed by, he cried to the king and said, “Your servant went out into the midst of the battle; and behold, a man turned aside and brought a man to me and said, ‘Guard this man; if for any reason he is missing, then your life shall be for his life, or else you shall pay a talent of silver.’ While your servant was busy here and there, he was gone.”

And the king of Israel said to him, “So shall your judgment be; you yourself have decided it.” Then he hastily took the bandage away from his eyes, and the king of Israel recognized him that he was of the prophets. He said to him, “Thus says the Lord, ‘Because you have let go out of your hand the man whom I had devoted to destruction, therefore your life shall go for his life, and your people for his people.’” So the king of Israel went to his house sullen and vexed, and came to Samaria. 1 Kings 20:38-43

The prophet of God revealed to king Ahab that God was not pleased with his sin and disobedience. Against God’s command, Ahab had spared his enemy king Ben-hadad. There is often a price to pay for disobedience. Sometimes its Divine correction, other times its the natural consequences. Our gracious God wants obedience. He prefers it above sacrifices.

Is there any disobedient area of my life? Has God told me to do anything that I am yet delaying?

God, what a day ahead. I am sure You have an adventure in mind again today. As I interact with people today, may I be obedient to You and Your will.