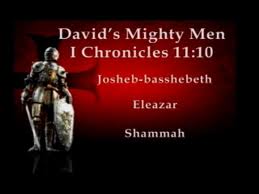 Now these are the heads of the mighty men whom David had, who gave him strong support in his kingdom, together with all Israel, to make him king, according to the word of the Lord concerning Israel. 1 Chronicles 11:10

David had gained credibility with the mighty warriors of Israel in his early days fighting the Philistines and even when he found himself fleeing from king Saul. Now those battles won in the early days, side by side, with warriors paid off. They cam e to support David being crowned as king. We should not discount the battles fought together in prayer and service to God and the effect it has on bonding us together with other believers. Its interesting that three stand out above the rest. All were important, but three were special: Josheb-Basshebeth, Eleazar and Shammah.

Who fought early battles beside me that I respect and can support today? Who am I fighting next to today? Who are the three special ones in my life right now?

God, on this day I have many people on my mind. None more than ‘hermano Gil’. Please be very close and real to him as his last days on earth draw to a close. Provide for his family in ways they could never expect. As I walk through this day, reveal to me those You would have me support. Thank you for these mighty men in my life: Chuck, Tony, Brian, Dale, Peter, Bob, and Michael.