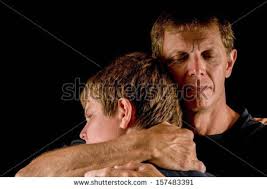 I have seen many fathers in tears over their sons. Absalom had revolted against David and pursued him to the point of a bloody military battle which resulted in Absalom’s death. The heart of David is grieved for his son in complete disregard for his own life which was put in jeopardy. Amazing. This is how father’s feel with children who go astray and rebel. I am not saying its right… 20,000 people lost their lives because of Absalom. But the only one David sees is his own.

How am I pouring into my sons and daughter? Am I nurturing their hearts so that they will remain faithful to God?

Lord, I don’t know. Sometimes I am too soft on them. But, I see each one growing in their faith and love for You. I do worry though, when the times get difficult will they lean in and discover more of You? I praise You that in this season I find so many blessings. Thank you meeting my needs according to the riches in Christ Jesus.