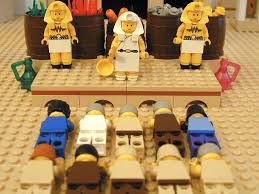 Now Joseph was the ruler over the land; he was the one who sold to all the people of the land. And Joseph’s brothers came and bowed down to him with their faces to the ground. When Joseph saw his brothers he recognized them, but he disguised himself to them and spoke to them harshly. And he said to them, “Where have you come from?” And they said, “From the land of Canaan, to buy food.” Genesis 42:6-7

The childhood dream that God gave Joseph was literally unfolding before his eyes. His brothers were bowing down before him. The drama was about to take some interesting turns as Joseph prepared to reveal himself. God is a promise keeper. It may take longer than we think, but all His promises are true. It is fascinating that at this moment it appears that Joseph is actually content, even before his brothers arrive. The contentment is expressed in the naming of his two sons… Manasseh means God has made me forget all my trouble and all my father’s household.” He named the second Ephraim, For, he said, God has made me fruitful in the land of my affliction.

Am I content while waiting for God’s plans to unfold? I may not be patient, but I tend toward contentment.

Lord, if there is any waiting today, help me find contentment with what You have already provided. As we worship today at Alianza, I pray that pastor Mario is refreshed, Robbie continues to be a great visionary too. May we be an encouragement to the people in the church and the orphanage today.